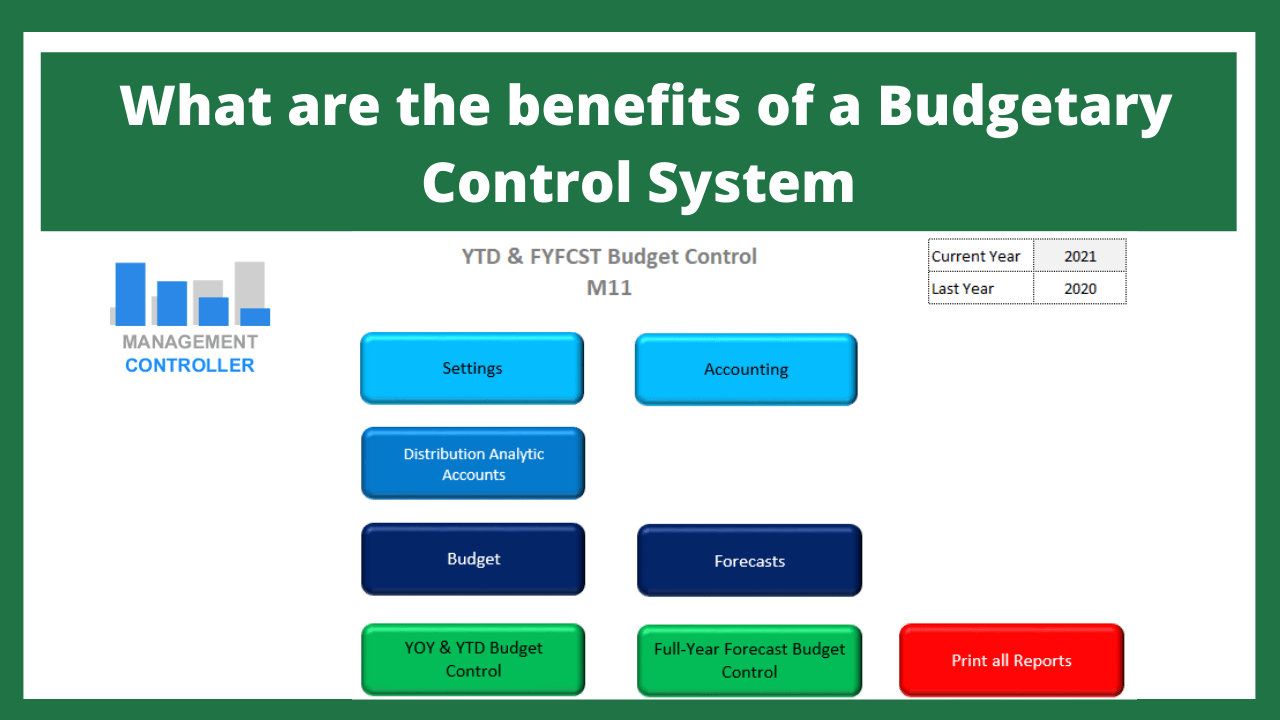 What are the benefits of a Budgetary Control System.

A financial budget is nothing more than an objective that the company sets in economic terms of how it wants or needs the result to be for a certain period.

The financial objective or budget must be aligned with the strategic plan of the company.

If the company has a growth plan, the financial objective must be in line with the expected growth (more hires, greater investment in advertising and marketing, investment in capacity of production…)

However, if the company has an adjustment plan due to the drop in demand, the objective should be related to this plan; personal cuts, investment stoppage, reduction of fixed expenses…

So the budget is our goal at an economic level regarding what the company plans to do and therefore the result it hopes to achieve.

This has several advantages over not having a budget and not keeping track.

If the company does not have a goal, the company can give one result or another, the result will be uncertain.

If the result is not controlled from the beginning, the company cannot establish a plan of measures to achieve it or apply corrective measures to modify the trend of a deviation from the real one with respect to the objective.

If the company does not set a goal, it does not know where it wants to go, it is like driving a car without having a destination in mind, we simply drive until at a given moment the vehicle runs out of fuel.

If we set an income objective and an expense objective, we have 2 control options.

1) Accumulated control as the accounting is closed each month (Year-to-Date or Accumulated to date).

This type of control allows us to anticipate the final result compared to the budget taking into account the Year-To-Date + justified forecasts until the end of the year.

In this model we incorporate forecasts that have an impact due to the actions that we plan and execute.

This system has a great advantage and it is that we can influence the final result to try to achieve the objective.

For example, we foresee that sales are a bit stagnant and if they do not increase, the objective will not be achieved as long as the gross margin is maintained and some items of structure costs are increased, but that allows exceeding the breakeven point for this growth.

Planning and executing actions on the forecasts taking into account the Year-To-Date result, we have a good chance of approaching or exceeding the set objective.

Otherwise, the only thing we can do is get a completely uncertain result, which can be positive or negative, we cannot influence it.

Are we interested in knowing where we want to go and putting the means to achieve it?

We tend to avoid uncertainty, we like to have everything under control, especially in financial matters.

What employee does not like to know what he is going to earn each month in order to plan its own finances.

In a company the risk is greater, so uncertainty should be reduced as much as possible.

And this is what budget control allows.

Recently, a frozen food company told me that they had tried to implement a budget on several occasions as a measure to redirect the situation of the company.

They had been with negative results for many years and they thought that the solution consisted in reducing the costs of raw materials, direct labor and overheads.

The many start-up attempts generated mistrust in the team, they considered that the tool contributed very little and wasting their time. The situation had demotivated staff for future management changes, even generating conflicts between different departments.

Analyzing the previous launch attempts, it was discovered that they had made some design mistakes.

1) They had not prepared the budget in line with the strategy and the Business Plan.

The strategy and the budget followed different paths, the strategy pursued growth, while the budget pursued cost reduction, in some cases the objectives contradicted each other. The budget is the economic translation of the strategy, so they must go linked.

2) They had not linked the accounting accounts with the activities and resources of the company.

They only took into account the accounting values ​​for the preparation of the budget. They had not produced a detailed income and cost budget for calculating gross margin and net profitability. Ideally, you should have an accounting budget, a cost budget, and a revenue budget.

3) They had not made an action plan that would allow them to achieve the objectives.

They had objectives but no plan of what to do, who has to do it and when it has to be done.

4) They had not delegated the different items of the budget to those responsible for the area.

There was only one person responsible for the budget, both for the design, as well as for its execution and control, in this case the person in charge was the head of administration, the area managers were unaware of their objectives and consequently had no motivation to act.

5) They had not involved responsibles of the area in the preparation of the budget.

They did not ask the people who knew the most about the company’s activities, those who know what can and cannot be achieved, as well as being the people responsible for executing the action plan.

6) They had not considered the budget as an overall goal.

Budgeting involves working as a team to achieve a common goal, not individual goals assigned to each area without a joint goal.

7) They were unable to detect the causes of the deviations.

They did not know that it affected the achievement of the budget, consequently it was difficult to know where to improve.

8) They did not use the budget as an improvement tool.

They only considered the budget as a tool to reduce expenses, the budget control system could not correctly perform its function of improving competitiveness, improving profitability, detecting opportunities, eliminating waste….

9) They used the budget as a tool of pressure and control.

The use of the budget as a control tool generates demotivation, distrust and rejection among the staff, which made its acceptance and implementation even more difficult.

Errors in the design of budgeting and its management can generate more problems than advantages.

The budget is an essential tool if your company needs to be more competitive and improve continuously to achieve positive results in the Income Statement.

Advantages of implementing a Budgetary Control System with Projections in your company: 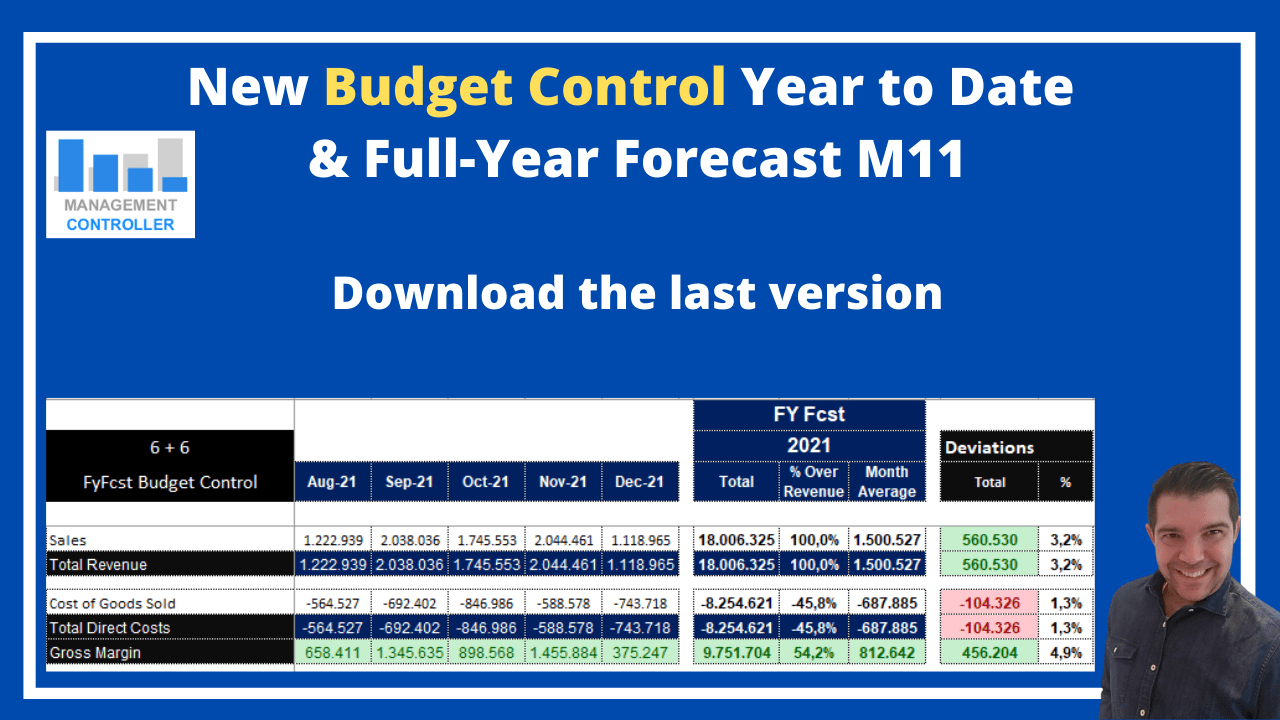 Hi, how are you doing? I’m Dani Granero unique owner of this site focused on Management Accounting tools, methods, examples and techniques. I am from Valencia (Spain)

I hope you consider the content of your interest and very useful. In my Spanish web site cashtrainers.com I offer Management Accounting consultancy, implementing services such as budget control including full year forecasts, treasury forecasts, budget cost calculation systems, management accounting tools performed with Excel, ERP ODOO training and counselling… I expect to offer soon some of these services through managementcontroller.com

This website uses cookies to improve your experience while you navigate through the website. Out of these cookies, the cookies that are categorized as necessary are stored on your browser as they are essential for the working of basic functionalities of the website. We also use third-party cookies that help us analyze and understand how you use this website. These cookies will be stored in your browser only with your consent. You also have the option to opt-out of these cookies. But opting out of some of these cookies may have an effect on your browsing experience.
Necessary Always Enabled
Necessary cookies are absolutely essential for the website to function properly. This category only includes cookies that ensures basic functionalities and security features of the website. These cookies do not store any personal information.
Non-necessary
Any cookies that may not be particularly necessary for the website to function and is used specifically to collect user personal data via analytics, ads, other embedded contents are termed as non-necessary cookies. It is mandatory to procure user consent prior to running these cookies on your website.
SAVE & ACCEPT